How COVID-19 Sparked an Air Quality Revolution in Healthcare

In this eBook, we explore the ways COVID-19 has bought attention to invisible threats in the environment and permanently changed healthcare expectations. We also explain why healthcare providers are now urgently searching for solutions that help protect patients from harmful breathing hazards in the environment.

As a primarily respiratory-linked virus, COVID-19 has underlined the importance of breathing clean air for all.

The pandemic has functioned as a reminder that many of the most harmful particles are both invisible and floating around us a lot of the time. Consumers are already reacting: According to the Associated Press, in the next decade, the air purifier industry is projected to experience a compound annual growth rate of 10%.

Most people live in areas that exceed the WHO’s guidelines regarding safe air pollution levels. As lockdown protocols began in early 2020, smog-heavy places like Los Angeles, suddenly witnessed a brief change in their skies, thanks to a momentary respite from heavy vehicle traffic. Unfortunately, this only lasted for 21 days, the longest stretch of clear sky LA had experienced in the past four decades. The temporary glimpse at the potential of clean air ignited people’s imaginations.

Health providers are becoming more aware of the outdoor-indoor air quality continuum - the reality that our daily interaction with pollution inside the home matters just as much as our experience with contaminated outside.

Having spent a lot more time indoors during 2020 due to COVID-19 restrictions, the focus has also turned to indoor air quality and ventilation management best practices in a bid to prevent virus transmission. The WHO came out with a roadmap to ensure proper indoor ventilation measures, not only in regards to Covid-19 but for general health benefits too.

In addition to air quality awareness trends, a number of research studies have confirmed an association between long-term air pollution exposure and the severity of COVID-19 symptoms - increasing care provider interest.

A 2020 Harvard study focused on 3,080 different counties in the United States and set out to explore links between air pollution trends over the last 15-17 years, and COVID-19 outcomes across different areas. The study found that long-term exposure to Fine Particulate Matter was significantly linked to COVID-19 likelihood of death. In other words, those living in highly polluted areas were significantly more at risk of dying from the deadly disease.  Specifically, the researchers found that a one-unit increase (1μg/m3) in long-term average exposure to fine particulate matter was associated with an 8% increase in COVID-19 mortality rate on average.

A European study focused on 66 administrative regions in Italy, Spain, France, and Germany found that 78% of COVID-19 deaths occurred in just five regions, which were also the most historically polluted. The research focused on historical levels of No2 exposure, in particular, concluding that prolonged exposure to this pollutant could also contribute to Coronavirus mortality.

A 2021 study investigating the link between airborne pollen and COVID-19 infection, alongside humidity, temperature, population density, and lockdown effects. Their study examined 130 sites in 31 sites across 5 continents and found that pollen, sometimes in synergy with humidity and temperature factors, explained 44% of the infection rate variability on average.

The strong links between environmental exposure and COVID-19 have functioned to raise awareness about the impact of air quality on other chronic diseases and health more generally.

For example, air pollution is a major exacerbator of various chronic diseases like cancer, diabetes, and heart disease, which, according to the CDC, have become leading causes of death in the US. Chronic disease is also the main driving factor responsible for an annual $3.8 trillion in various healthcare expenditures.

One of the largest studies on the impact of air quality on health, carried out by Canadian researchers, found an 8% increase in same day doctor’s visits for people living with major chronic diseases per same day NO2 10 ppb. The study also found a 4-6% increase in ER visits up to 6 days after peak exposures to PM10, PM2.5, NO2, and SO2.

Many symptoms associated with respiratory inflammations and diseases worsen as a result of air pollution and pollen particle exposure.

An early 2020 European study found that higher concentrations of air pollutants like Nitrogen Oxide and PM2.5 can increase the chances of severe rhinitis symptoms by 17%. Further, in a study conducted by the Johns Hopkins University of Baltimore, 25 to 30% of those suffering from Chronic Obstructive Pulmonary Disease (COPD) - responsible for 726,000 annual hospitalizations and over $32 billion in estimated costs - were found to also suffer from allergies. 82% of these allergies were pollen-related.

A Spanish study on the effects of increased pollutants in the air on COPD and asthma sufferers found an increase of 5% in ER visits per 10 μg/m(3) SO(2) increments. A researcher from Yale University observed that, among asthmatic children, exposure to even relatively low amounts of pollen (6-9 grains/m3) triggered symptoms.

The WHO estimates more than 50% of annual air pollution-related death cases occur due to ischaemic heart disease (restricted blood flow) and strokes, making it the largest chronic disease category for air pollution attributed death. Studies have also shown that long-term exposure to air pollution can negatively affect blood pressure, as well as accelerate atherosclerosis, and essentially cause our blood vessels to age more rapidly.

High air pollution concentrations can also raise the risks of sudden heart attacks and strokes. A 2018 report from the American Heart Association predicted cardiovascular disease sufferer numbers will grow to 45% by 2035, with related annual costs doubling from 555 billion dollars to 1.1 trillion.

During the fierce 2020 California wildfire season, researchers advised many people to stay home as they saw heavy smoke exposure increase the risk of out-of-hospital cardiac arrests by up to 70%.

Epidemiological evidence from the US National Library of Medicine suggests a direct correlation between prolonged exposure to pollution and worsening of T2DM conditions, with the effects varying according to duration, concentration, and the types of pollutants involved.

In fact, studies suggest that inflammation caused by air pollution particles can potentially even induce type-2 diabetes in some cases, by affecting glucose metabolism and reducing insulin sensitivity.

COVID-19 has forced governments and healthcare systems alike to find creative ways to meet social distancing requirements and keep unnecessary burdens on doctor’s clinics and hospitals down. In doing so, healthcare technology has become more of a priority than ever before:

Pre-covid, reports suggest that less than 10% of patients utilized telehealth solutions online or via apps, but within weeks of the pandemic’s start, digital-first strategies started to be implemented on a worldwide scale. From remote monitoring to diagnosis, many telehealth platforms began encouraging patients to engage in various healthcare provisions without any physical interaction with their primary caregiver. Reports state that 2020 saw an increase of 57% in telehealth solutions usage by patients, with an estimated 20% of all checkups and doctor’s appointments taking place via telemedicine.

Before the start of the Covid-19 pandemic, there had been research into different AI implementations for healthcare use. But with the onset of this global crisis, we saw not only a strong course shift towards AI but more extrapolations and deployments of AI in the digital healthcare world:

From planning for resources and hospital capacity to disease surveillance and vaccine research and trials, the Covid-19 pandemic also demonstrated how crucial it is to be able to share data quickly and across different platforms. Public policy decisions and health management relied on aggregated data to help determine social isolation rules, testing strategies, and government lockdowns.

The effective implementations of data sharing and AI during the pandemic have helped demonstrate a growing need to combine healthcare information with technology to bolster general public health against future health threats.

Historically, healthcare providers faced an information gap when it came to understanding the environmental impact on a person’s health, especially for chronic diseases such as asthma, COPD, and heart disease. Without access to highly personalized information about an individual’s context, it was extremely difficult to interpret the role of the environment on symptom flare-ups - or indeed, to empower patients to avoid personal and often invisible triggers in the air around them.

Advances in big data, AI, and environmental monitoring have opened up a world of opportunities for health providers in this respect - as new access to high-resolution air quality and pollen intelligence provides valuable insight into an individual’s health exacerbation and new avenues for patient engagement.

We are now seeing a whole new category of use cases within healthcare, centered around the notion of ‘health-focused environmental intelligence’. For delivering therapeutics, this is about much more than raw data, it's about providing actionable health insights to vulnerable individuals so they can take proactive measures and protect themselves from hazards around them. 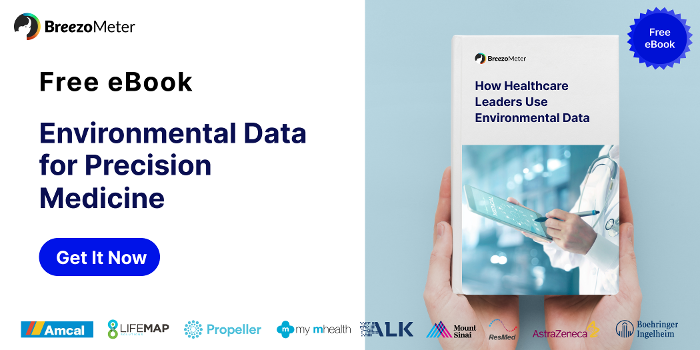 Talk to Us about Integration